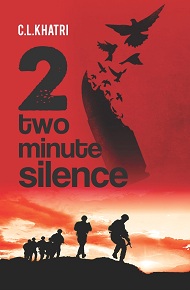 C. L. Khatri is a perceptive critic, editor and bilingual poet writing in both Hindi and English. Two Minute Silence is Khatri’s third poetry collection after Kargil(2000) and Ripples in the Lake (2006). It won’t be hyperbolical to maintain that the collection of poems is an assertive endeavour to redefine poetry with all its subtleties aesthetically ensured. If poetry is a holistic medium to communicate, the collection under discussion best serves the purpose. The innovative use of language stands out as a distinctive signature of Khatri who with his uncanny vision and extraordinary poetic sensibility is not only able to conjure up language but is also quite proficient in creating cross-cultural space shared by twenty first century readership across the globe. While on the one hand, the multiplicity of inter-literary allusions signifies the classist tendency like that of T.S.Eliot, on the other hand, typically chosen individual subjects with wild imagination scattered through language and thought draws close parallel to romantic spirit of writing. In fact, the maverick style of Khatri wherein he deftly dovetails the typically traditional topics across chronological line with skilled linguistic idiom of the time does not fairly lend to any specific categorisation of his as a poet. So, it would be rather sensible to call him a post post-modern, magical, realist, romantic poet-all rolled into one.

That poetry is born of angst and anxiety, pain and suffering is justified by a large number of poems contained in the collection, Two-Minute Silence by C.L.Khatri. The poem, Government Schools is one such deliberate choice compelled by the hilarious circumstances that characterise such schools in India. The closing expression ‘the poet cries, the future fucking’ is an expression of utter disgruntlement of the poet who is left disillusioned with the stark realities of government organisations. ‘The use of ‘fucking future’ is not only linguistically contemporary but also semantically melancholic.

One of the prominent features of Khatri’s creative corpus is his use of dialectal expression. The entire collection is replete with wondrous use of culture specific words and idioms. The words like chulha, sattu, haa haakaar, etc. are a select few expressions which conspicuously cater to the specific readership.

Variety of the subjects is one of the prime characteristics of the collection, Two- Minute Silence. Some of the poems are highly reflective while some others are quite rich in detail. The poems like Homage to Maa, The Falgu and The Paean to Patliputra effortlessly thrive on the richness of detail while simultaneously acquainting the readers with the native traditional heritage which surfaces apparently in many other poems as well. But the description as untypical of poetry is superseded by the invective critique of the socio-political order rendered in most poetic idioms befitting the purpose. The expression like ‘There is truth eclipsed in truth’ in the poem, Poetic Justice is not only reminiscent of ‘word within a word, unable to speak the word’ in Eliot’s Gerontion  but is also emphatic in communication of truth ‘swaddled’ with mist of nebulous decisions. It seems as if Eliot is reborn in Khatri to perpetuate the grave concerns of post modern dilemma which takes over all decisive actions of humanity.

That literature is a cultural manifestation and culture is bi-product of literature is amply justifiable in Khatri’s collection of poems under discussion. Two- Minute Silence is a reflective compendium of cultural practices nourished by the moisture of mythical references without which any cultural merit would remain incomplete. Poets across time and space have spoken of cultural immensity in their works to the extent that the poetic corpus is most often considered a cultural study rather than a mere poetic flight of fancy. Khatri too as a seasoned poet endowed with profound cultural sensibility incorporates many an organ of culture with requisite linguistic expressions conveying the nuances contained therein. The poems like Vijayadashmi, Holi, Ahilya’s Astra, Jogi Ji Wah Jogi Ji, Hell on the Hill, to name a few, best communicate the cultural ethos of place signified by the use of typically culture specific terms like Jogi ji, sindur, bhang, thandai, sarara etc. Khatri’s choice of festivals and rituals for poetic composition is not made for the glorification thereof, nor is it made to exhibit his cultural taste and scholarship, but it is deliberately chosen to revisit the context with the reformative vision of a poet. Hence, the wry humour and dry sarcasm qualify each mythical reference taken up in the collection.

Historical sense as stated by Eliot is what asserts the merit of a creative writer of great order. Khatri’s sense of history is very much palpable in some of his poems. The poems like Bull’s Reaction, Beads and Ballads and New Invention in particular are but the literary manifesto of impeccable historical sense of Khatri who exploits it as a tool to set up the link between a worried, irritated man and a gifted creative poet. By maintaining proper aesthetic distance, Khatri is able to distinguish the identity of the man who suffers from the artist who creates. Deceptively plain verses like ‘on the margin stand Ashoka trees/ Beheaded looking like torso’ are in fact quite interrogative if approached closely. The historical reference with contemporaneous treatment compels profound reflection characteristic of any grave literary pursuit both as a reader and a writer.

Linguistic expertise as pointed out in the beginning of the review is what we may call the USP of Khatri’s Two- Minute Silence. It becomes even more efficacious when tremendous experiments go effortlessly into making of an appropriate language pattern corresponding to the diverse range of complex subjects undertaken in the collection. His frequent use of code-switching without any transliteral endeavour signifies his linguistic deftness employed to achieve the literary communication as required by the context. Still more interesting is the innovative incorporation of cultural idioms into English syntactic structure. Expressions like ‘lying in his samskar’, ‘om shanty om’, ‘Ram Naam Satya hai’, ‘Started tandav’, ‘giving us thekua’, ‘The peon pranamed’’ are few examples of linguistic wonders that the collection records. They simultaneously unravel the cultural contour of the nation as well.

Literature is universally defined as the mirror of society. It shows and should show the ills of socio-temporal mundane realities. But to relegate literature to the mere function of exposing the drabness of the society is not only a hackneyed impression but also little too much of underestimating its dynamic reformative potential. As such, literature is not only the mirror of society but also the creator of a society worth living for mankind. The altruistic end of literature is achieved by the well informed, refined and creative sensibility of the writer who is acutely sensitive to the disturbing concerns of people in general. Khatri’s Two- Minute Silence in this regard redefines literature in general and poetry in particular in so far as it attempts to expose the malaise of the time and critique the predicament of post-modern human phenomenon. But the manifest optimism of the poet transcends his awareness of dismal circumstances which compel his poetic verve. Like Eliot of Gerontion, again, who believes that ‘Christ the tiger would come in the juvenescence of the year’, Khatri is able to foresee the good time when he says: ‘Don’t despair the old year’ and ‘Three cheers for change’.

The entire collection under discussion records the clear influence of T.S.Eliot in both the thematic choices and linguistic treatment thereof. At times, it appears as if the semantics and the syntax of his poems are modelled on the creative base of Eliot’s poetic corpus. Poems like Peaceful Soul, The Falgu, Flower of Opium and above all, Two- Minute Silence for the choice of themes, and expressions like ‘mixing memory and desire’, ‘a crow defecates on his head’, ‘But a woman is etherised upon the table’ and ‘There is a truth beyond this truth’, to choose a few from the collection, evoke a sharp memory of Eliot’s works signifying thereby the identical problematics of time pervading across the spaces the treatment of which would have been otherwise unfair without an already tested linguistic idiom at the hands of none other but Eliot himself. Here the purpose of Khatri in doing so is to effect verisimilitude by drawing thematic and linguistic parallel with Eliot rather than to strike merely a semblance with the great artist of literature.

The title of the collection, Two- Minute Silence is particularly remarkable for its profound sensitivity expressed for the disturbingly changing phenomena of the socio-cultural reality that prevails in India in the name of development. Highly elegiac in nature, the poem manifests poignant sarcasm mingled with sad realism. Once again, as a critique of degenerating values, the poem evokes the memory of T.S.Eliot noted for his deep worries for deteriorating socio-moral values in Western European society. But Khatri in his creative endeavour goes a step further by striking contemporaneity when he comments on the predicament of post-modern concept of global or rather glocal vision of the world:

Stinking water of the sacred rivers

Khatri’s poems are tremendously evocative integrating what Matthew Arnold terms ‘poetic truth’ and ‘poetic beauty’. If ‘poetic truth’ and ‘poetic beauty’ account for the actual merit of poetry, the ‘Haiku’ section of Two- Minute Silence best serves the purpose. Capitalising on the economy of words as characteristic of Haiku form of poetry, Khatri’s creativity justifies what is universally acknowledged as “Brevity is soul of expression” or “Language is the art of concealing thoughts’. The imaginative wonder of the poet can go to the extent of making ‘Gandhi escaped Godse’s bullet/ committed suicide.’ While some of his haikus unravel mysterious truth such as ‘Smile on the face/death reveals more than his life/man and his mask’, others thrive on quite a lateral thinking inverting the commonly believed idea such as ‘Beware of dogs/dogs revolt holding placard/beware of men.’ That hypocrisy, double standard, pathetic irony etc. are the timeless subjects of literature are still more efficaciously strewn in the little bouquet of haikus in the collection. ‘Poets stand at crossroads/Cultivating crops of cough/for posterity’, ‘Cactus grows flowers’/ and / ‘Education means/migration from the village/gaps and Diaspora’/ are a select few from the heavenly haikus that are not only aesthetically rich enough but are also equally profound in sensitising the readers about the changing ways of the world.

Two-Minute Silence  by Khatri, I must acknowledge, calls for two minute dip into the profound sea of sentiments and poetry exuberantly blended together. Reflecting upon the contours of time, taking cultural ethos in its stride, the collection emerges as a timeless creation for lovers of literature in general and poetry in particular.