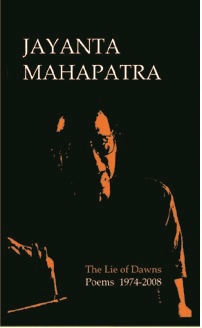 Jayanta Mahapatra's poetry unfolds into the landscape of Indian writing…

His verse, silent, subtle and intense, truly becomes him. For years he has ‘purified the dialect of the tribe' with his poetry of teasing indirection, sensuous suggestiveness and metaphoric interiority delivered in an idiom of enviable precision. Few poets have been able to do what Jayanta Mahapatra has done, turning poetry away from statements towards a delicately layered utterance and effecting thereby a noiseless rupture with the dominant tradition of Indian English poetry with the metropolis as its source and centre.

This comprehensive volume makes the reader relive the entire process of Mahapatra's significant emergence as a poet of India and of Orissa, who changed – aided in this effort by A.K. Ramanujan, R. Parthasarathy and Kamala Das – the rules of versification by writing back in the small man, the small time and the small life. It has representative poems from fourteen out of sixteen volumes of poetry he has published till date, starting, appropriately enough, with the third volume, Waiting (1979). With this, Mahapatra burst onto the scene of Indian English Poetry in the nineteen seventies with his, to quote him, ‘language plus' approach to writing verse. The volume includes, alas, just one poem (“The Sprouting Grass”) translated into English by the poet from the original Oriya, permitting us a quick glimpse of his bilingualism.

What is language plus? Basically it is about the penumbra of unsaid things constituting the meaning of a poetic line, beautifully captured by a recurrent figure in Mahapatra's poetry, ‘half-light of dawn'.

This sort of verse hinges on ambiguity. But ambiguity is not a mere formal matter in Mahapatra. It cuts to his poetry's very bone. Since Mahapatra creates his world out of ordinary words and things such as stone, ash, wood, dust and bone, he cannot make them take on a burden of meaning without pushing them beyond their linguistic borders. The stretching makes the cultural coding of these words, their significations, explicit in order for us to die for or vie against them.

To give just one example, the Oriya deity, Lord Jagannath, who is a pervasive presence in his poetry, is carved of wood and hence the troubled reflection on the ‘haunted wood and the hunted myth' and the ‘swaddled sod' (“The Lost Children of America”). In invoking these words and their subconscious meanings and associations Mahapatra's poetry operates simultaneously on the sacred and the secular planes. We see the mythic invocation at the start of his Sahitya Akademi award-winning iconic poem “Relationship”, which is an extended meditation on the sense of place, identity and belonging. In its deep lyricism and introspection, stark realism and its overall mythic drift the poem is Eliotian in scope and function, doing for the Indian sensibility what the Wasteland or the Four Quartets famously did for the British one. These lines, reminiscent of Eliot's gesture of expiation, show why:

Those who've been my friends …

have known only how to keep walking toward themselves

along the upraised road, unsullied by guilt and belief:

the rapture of ownership on their voluble faces

As the long poem unfolds, myths of his home land are seen in close interplay with what Mahapatra calls ‘this earth-sense'. Here are a few among the poem's many beautiful lines:

And the town of Cuttack where I was born,

Its lanes scarred by ruts from whose clay

The goddesses take their sacred shapes.

“We are delivered by the myth”, says the poet. But poetry for him clearly has many other uses and ruses, not the least of which is a simultaneous interrogation of and quest for the self. The fact of the self being trapped within a ‘social order' (“Grandfather”) produces the angst of Mahapatra's poetry which then has for its goal the self's authentication.

Here Mahapatra's unique way with words helps, making them come together in surprising new combinations and juxtapositions, thus offering a hope of redemption of the world through language. Coinages such as “language of clogs over cobbles” (“Sanskrit”), “Seasons reason through their branches” (“Possession”) and “my blood drowsy in the mosquito-hum of chanting” (“Faith”), to name only a few, come to mind instantly.

Surely these poems will go a long way in reinforcing the belief among lovers of poetry that Mahapatra is one of our time's finest idiom makers.