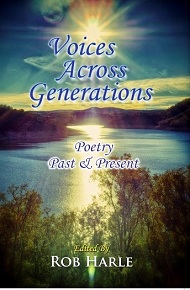 I found out quite by accident that my great grandmother was not only an artist but also a poet. Most of her work was written in the late 1800s in England.

Some of her poems are of a green activist theme, highly unusual at that time, especially as she was a well-to-do English woman and wife of a highly respected doctor and scientist. Some of her poems lament the terrible living conditions then and the children dying from polluted air and water. England glossed this over pretending everything was good! This reminded me of the CSG situation in NSW and many of my own poems.

I wondered if other contemporary poets had ancestors who also wrote poetry? Well surprisingly I found many did, not only ancestors, but also descendants! This very recently published book, Voices Across Generations

is the result of this epiphany.

It has been a long time in gestation and took incredible effort in transcribing the poet’s handwritten poems, and scanning the old images which have important historical and cultural interest. It runs to almost 300 pages with contributors ranging in age from a mere eleven years, to well over ninety, who  hail from many countries including UK; USA; India and Australia. Local poets include Nathalia Buckland, Bronwyn Owen Allen, myself and ‘almost’ local Kerry Petherbridge and Hamish Danks Brown. The beautiful cover photo is by local photograper and Powermax man, Alex Clarke.

This book has indirectly become a reality because of my recent expanding literary connections with India. Prior to this I would have been daunted by the dearth of Australian publishers even vaguely interested in projects such as this. Having a respected and reputable publisher ready and willing to publish volumes of poetry and literature, even though they do not sell well, lifted my spirit and enabled me to proceed with confidence and enthusiasm.

Voices Across Generations is not intended to be a showcase of the ‘best’ poetry in the world, though many of the works included belong in this category. It is more to show the similarities and differences between poets from different eras and of different age groups. This gives us an almost palpable feeling of much recent history in our respective countries.

A number of the poets in this volume have mentioned that formalising, so to speak, their connection with poet ancestors especially, has empowered and inspired them to continue the rather lonely, thankless task of poetry writing. For others to have their beloved dad or mum’s work published alongside their own has brought great joy and honoured the “ink in their respective veins”.

Voces is available direct from the publisher Authorspress in India.